26 short stories from each province of Costa Rica. There are some really marvellous tales (some not so) which provide insight into what makes a Costa Rican tick.

One tale about a hospital stay maybe 80 years ago features a young girl bitten by a snake and the wonderful time she had in the old hospital in Alajuela - our home town. Times were simpler then.

31 short stories from women writers with "a continuous theme running through" for "a note of hope for a calmer future". It is hard to find much translated fiction but this and the previous book add the insights we "gringos" often seek when trying to unravel "what happens" around us in this new culture.

I am probably the first and last reader of this particular book. As I turn the pages, each newly read page becomes detached from it's poorly bound spine. Thankfully, for now, the new tales ahead of me are complete and together - ready to create new imagery or provoke new thought or answer old questions.

The old tales, images and thoughts are disintegrating into a collection of messy individual pages awaiting the first time this tome gets dropped. The book will fall and (catching air as it does) will fly apart into the components that were once assembled at a cheap bindery ready to go to market. On the floor they will lie - in discombobulated piles. Perhaps that day it won't be so windy? Or hopefully there won't be a big puddle awaiting the opportunity to make matters worse? Who can presume what horrors await a book with no spine?

I will notice those certain pages with their corners turned and maybe save JUST them? Where do you put such things? A book is such a nice convenient storage mechanism.

When it is done right. Alas this one was not. I am the last reader. Perhaps there is a purpose for Kindle after all? 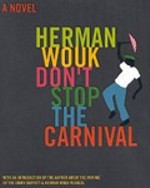 FUNNIEST NOVEL ABOUT STUPID GRINGOS TRYING TO MOVE TO THE TROPICS

Living in a small hotel in the tropics you are sure to run into some characters. One such is Paul, an orchid afficianado, preparing to move to paradise. He suggested Herman Wouk's book and insisted I read it. After ignoring his recommendations for a year finally I did.

What a marvellous and funny read and a book NEVER to read BEFORE you move to the tropics. By then it is too late and you are already living Norman Paperman's life.

For a multitude of laughs you must start by reading Herman Wouk's hilarious tale of Innkeeping in the Caribbean – "Don't Stop the Carnival". From the chapter titled "The Quake",

"On his first week of Caribbean hotel-keeping, Norman Paperman had netted thirty seven dollars and forty cents. There were reasons for this shocking figure to be sure. The payroll was large: cooks, maids, waitresses, steel band, and gardener: none of them were paid much but it added up to a lot. There had been the terrible water purchase. Money had to be set aside for the bank; and this he would have to do for some 300 weeks to pay off the loan and the notes. The revenue from the new units was supposed to balance off this drain, but they remained unbuilt. The game room stood open to wind, moon, rain and sun, undisturbed by human hands (for weeks). Bids to complete the job had come in. The range of prices was imbecile. The low bid was $1500 the high was $21,000. Collectively the (local) contractors seemed to have as much reliability as a flock of migrant birds, and little more knowledge of construction."